Bangladesh University of Engineering & Technology  Admission Circular 2018 -2019 has been announced.
Bangladesh University of Engineering & Technology (BUET) academic year of 2018-19 online admission process for the Honors first-year admission test Application begins on 01 September 2018 and application end time will be on 10 September 2018. Application test will be held on  07 October 2018.

Important dates for the admission process of BUET 2018-19

Bangladesh University of Engineering & Technology academic year of 2018-19, Candidate will have to apply for the honors first-year admission test for online. This year will be able to enroll in Total 1060 students. 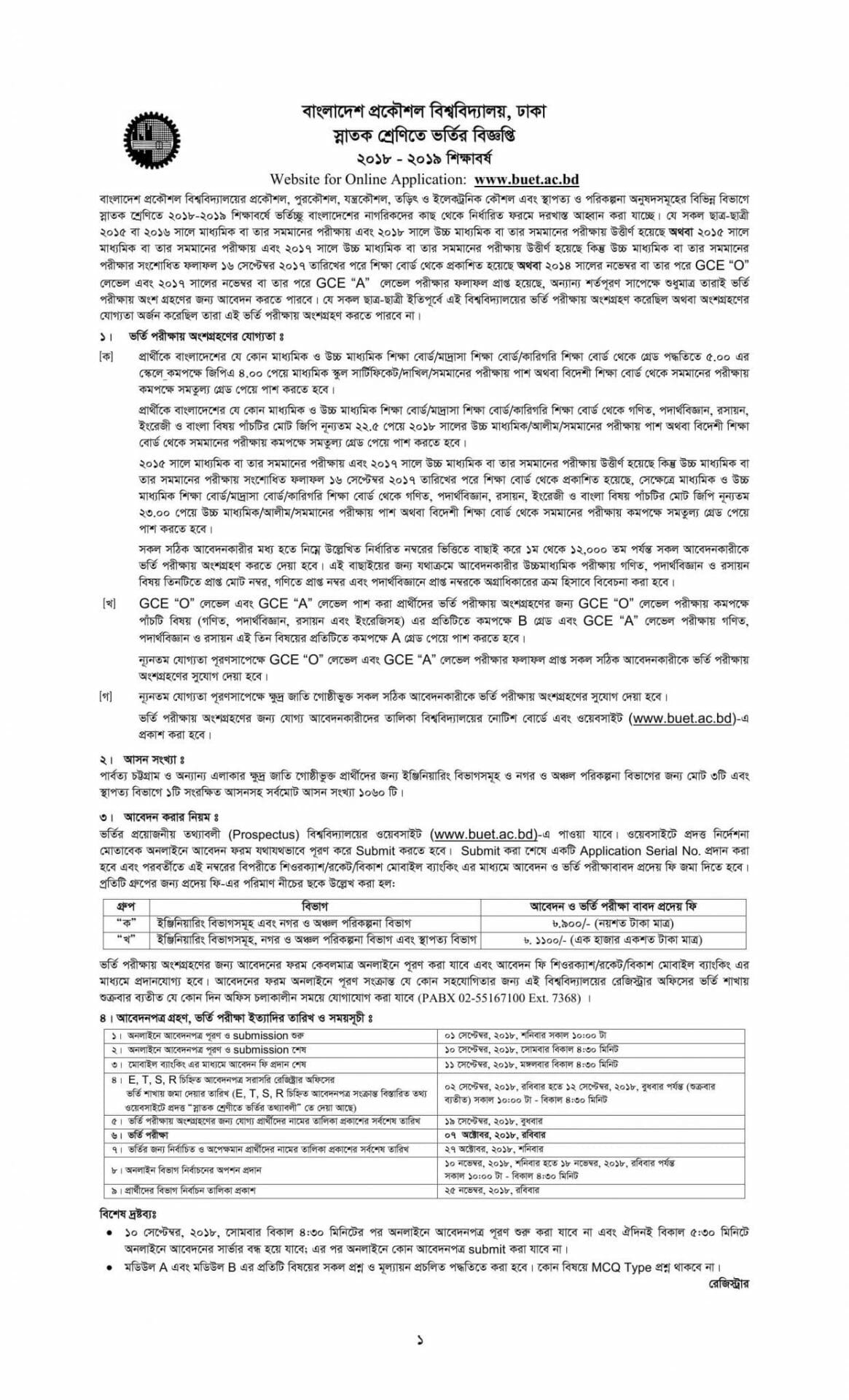 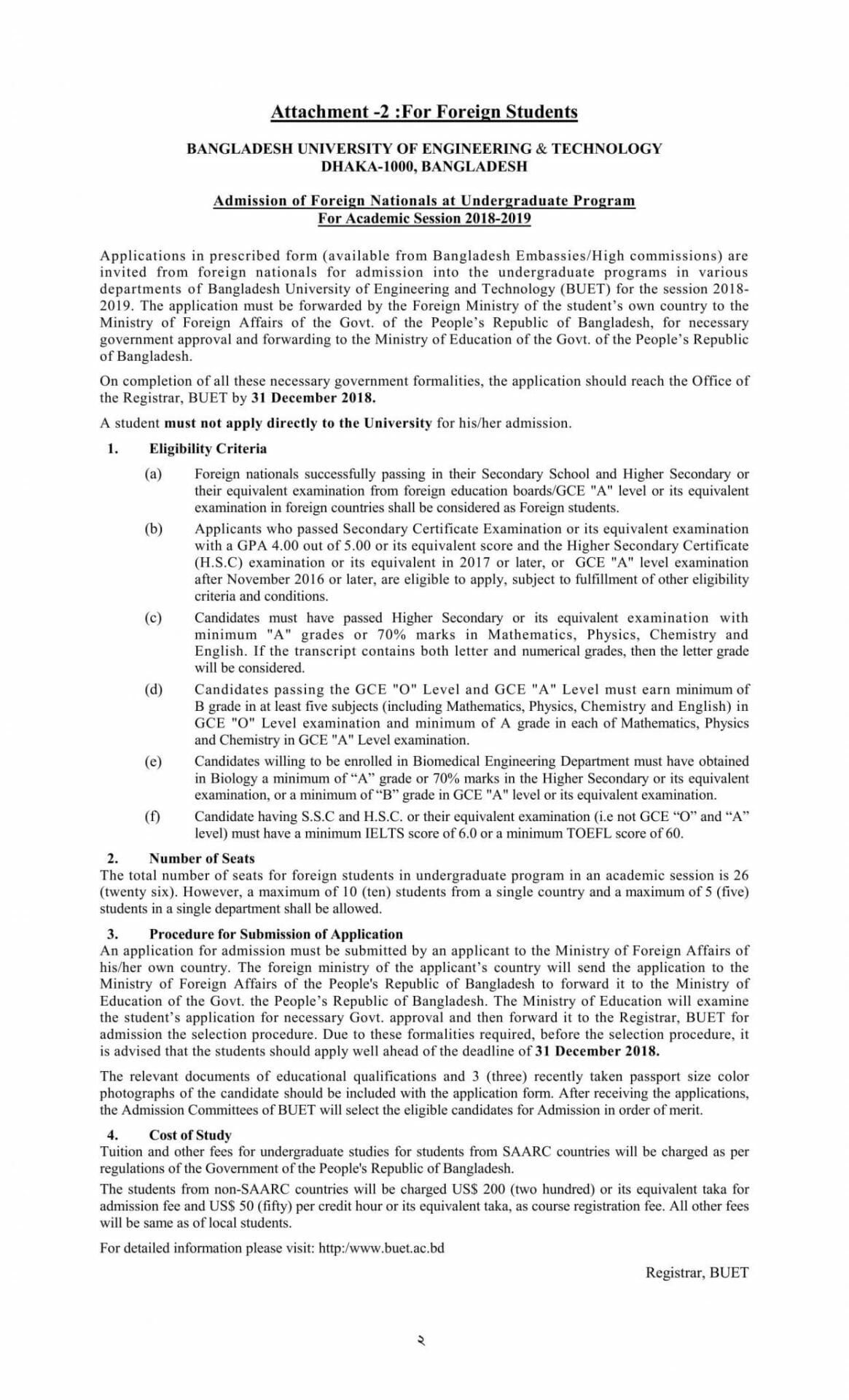 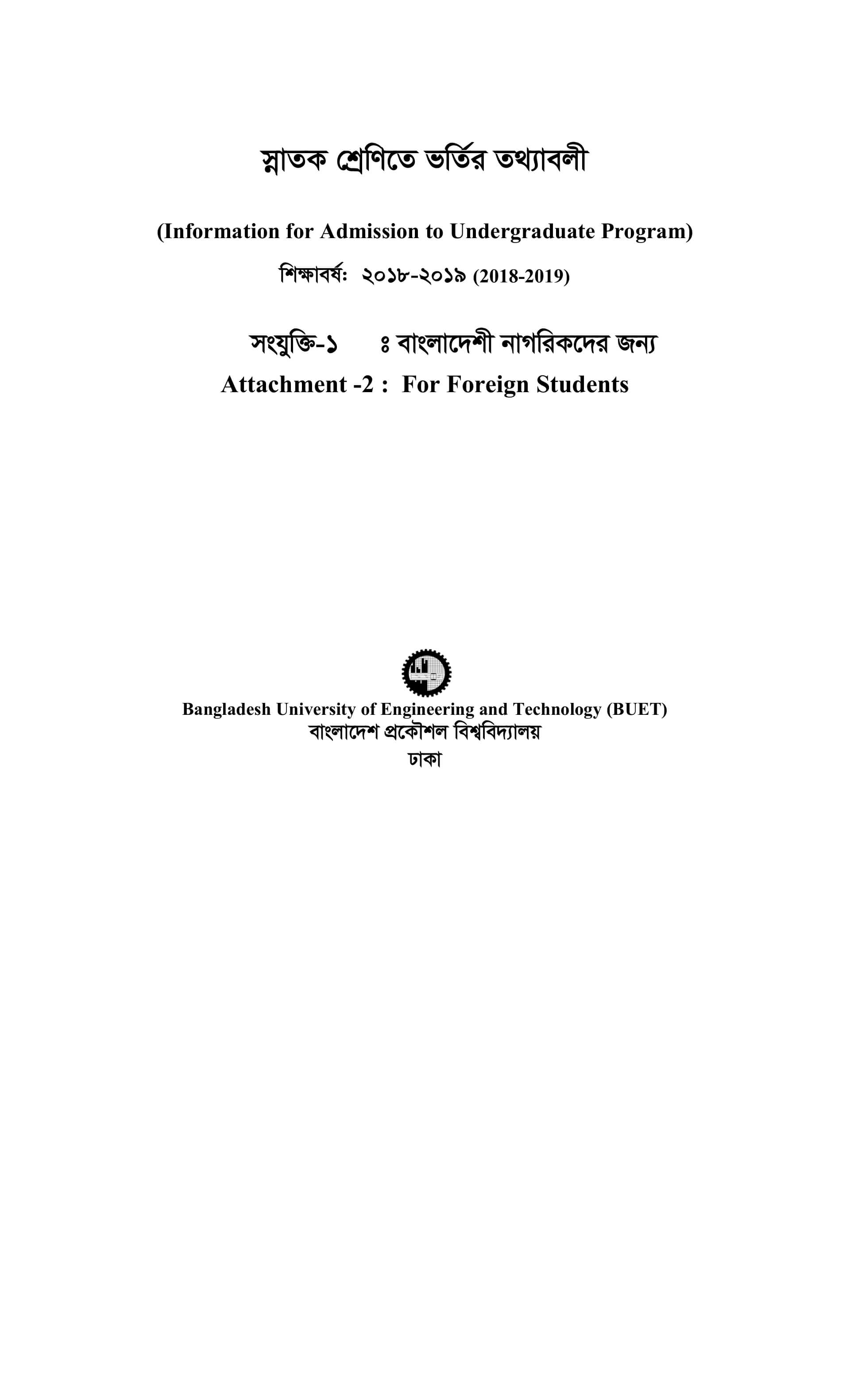 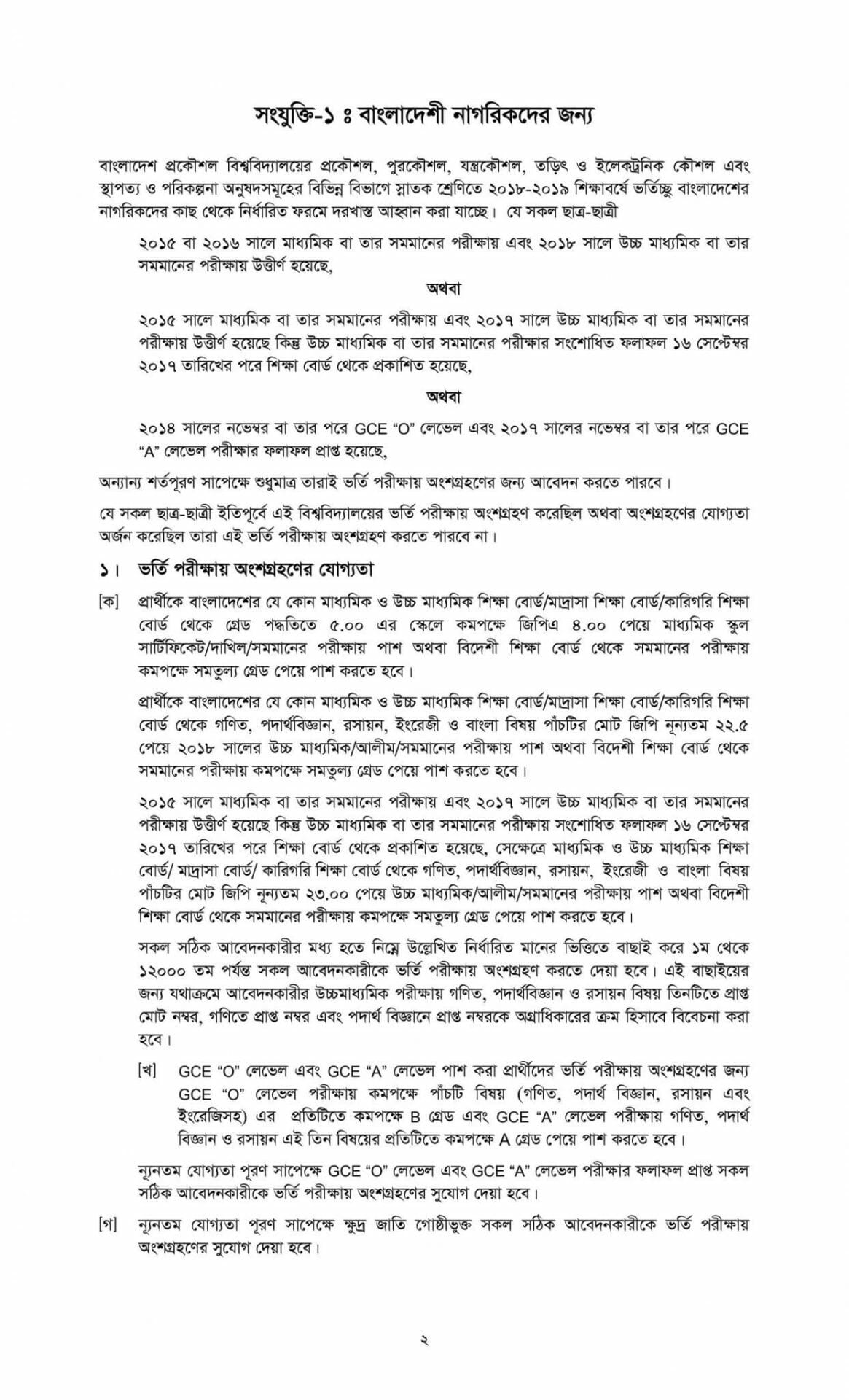 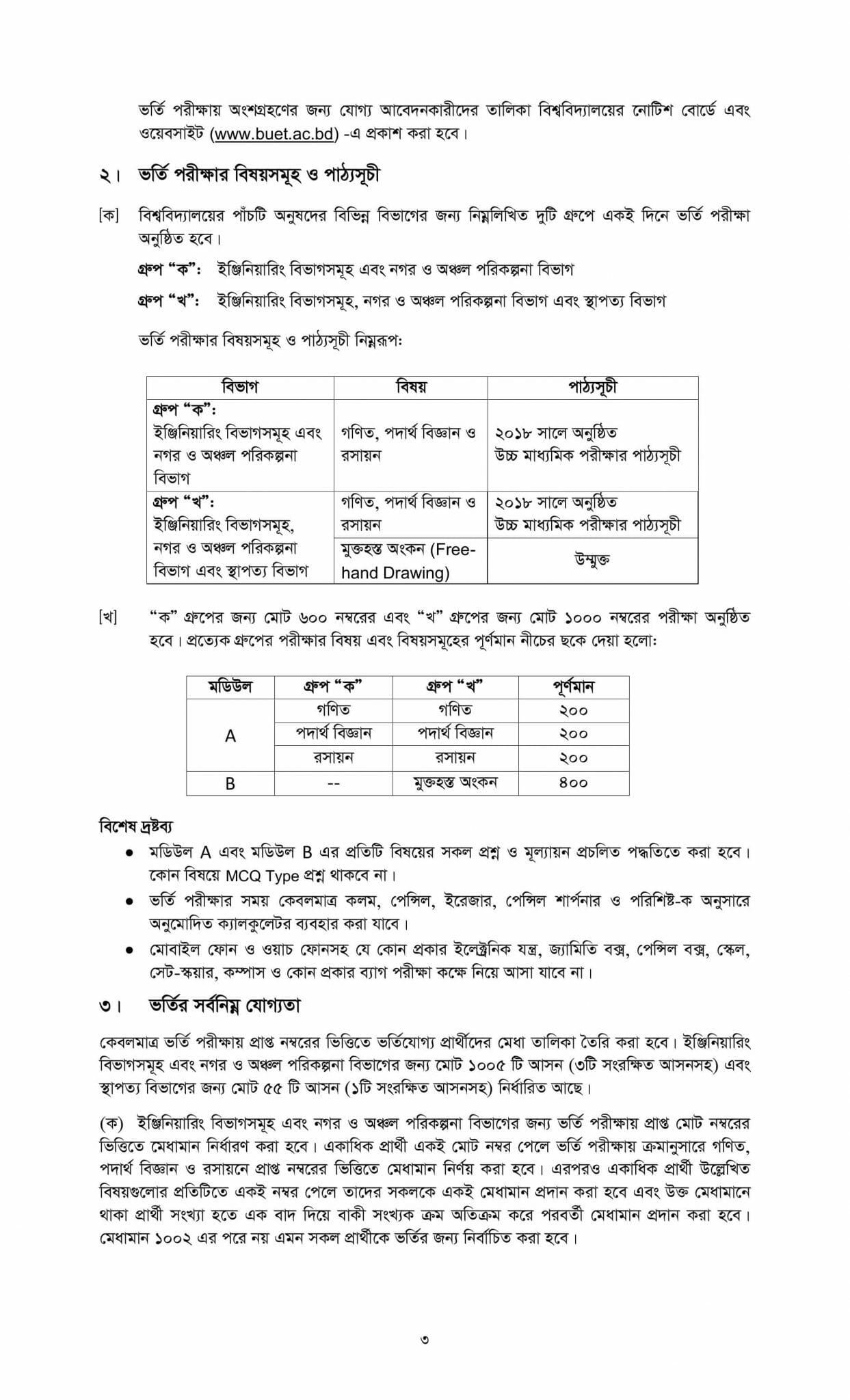 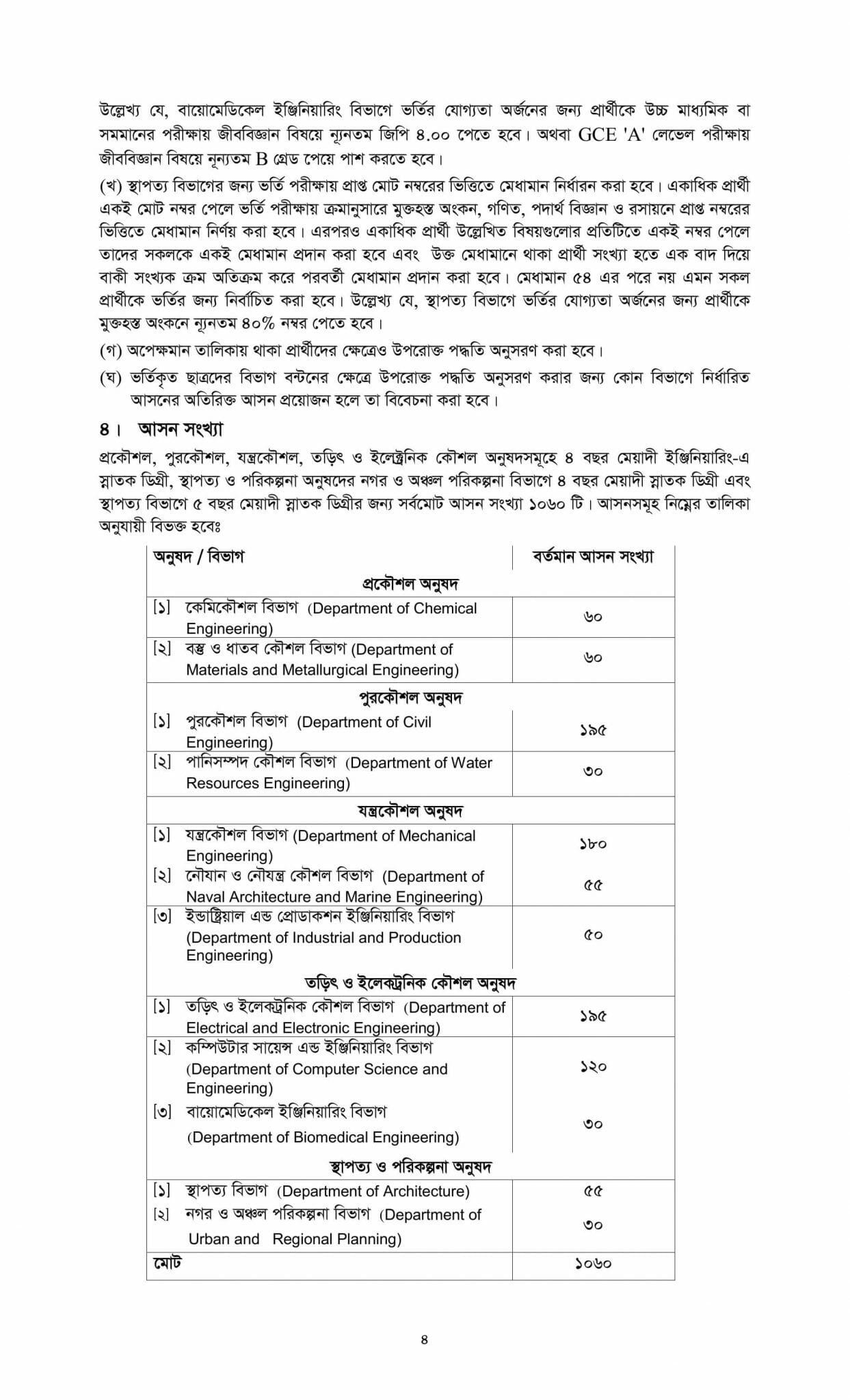 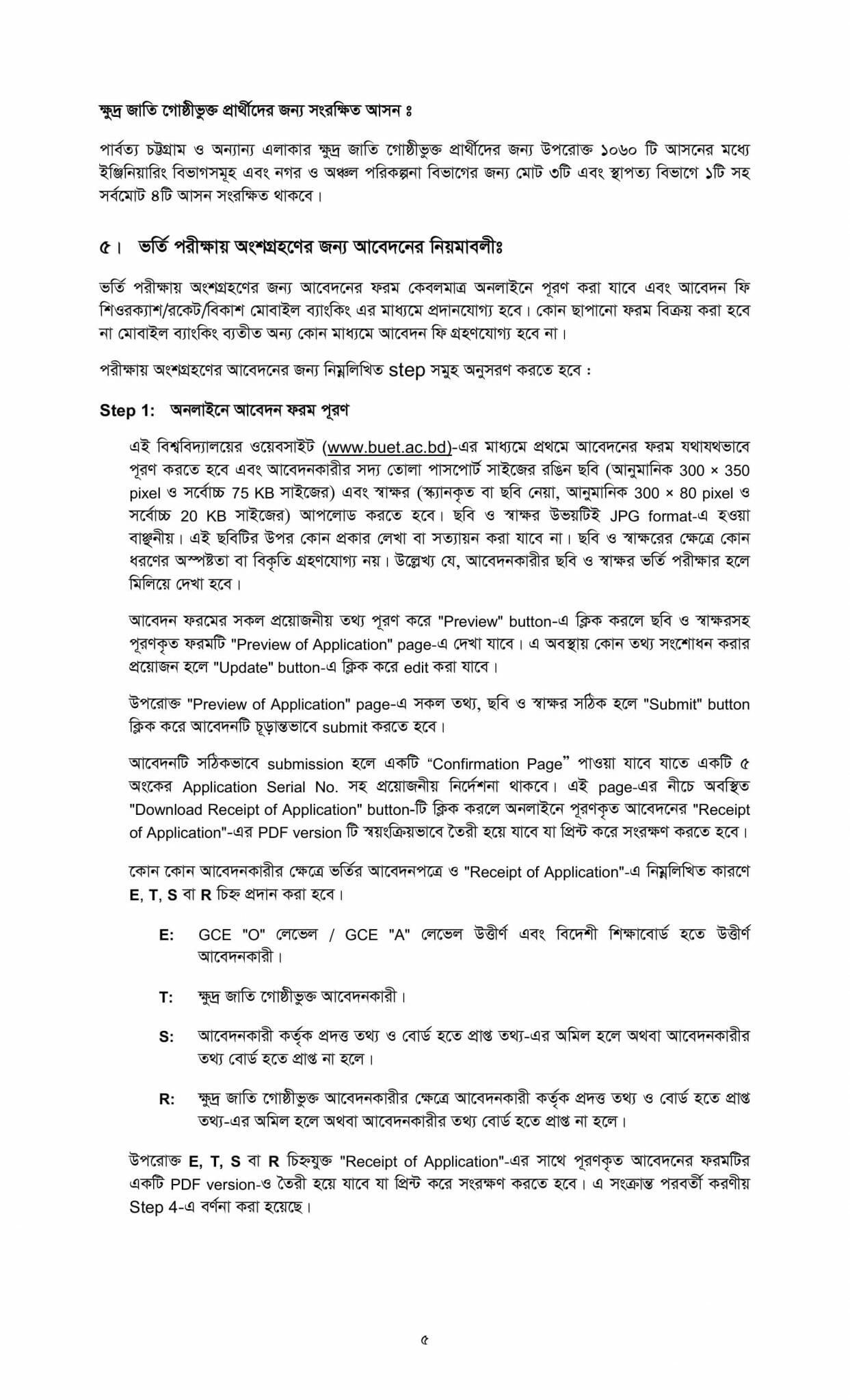 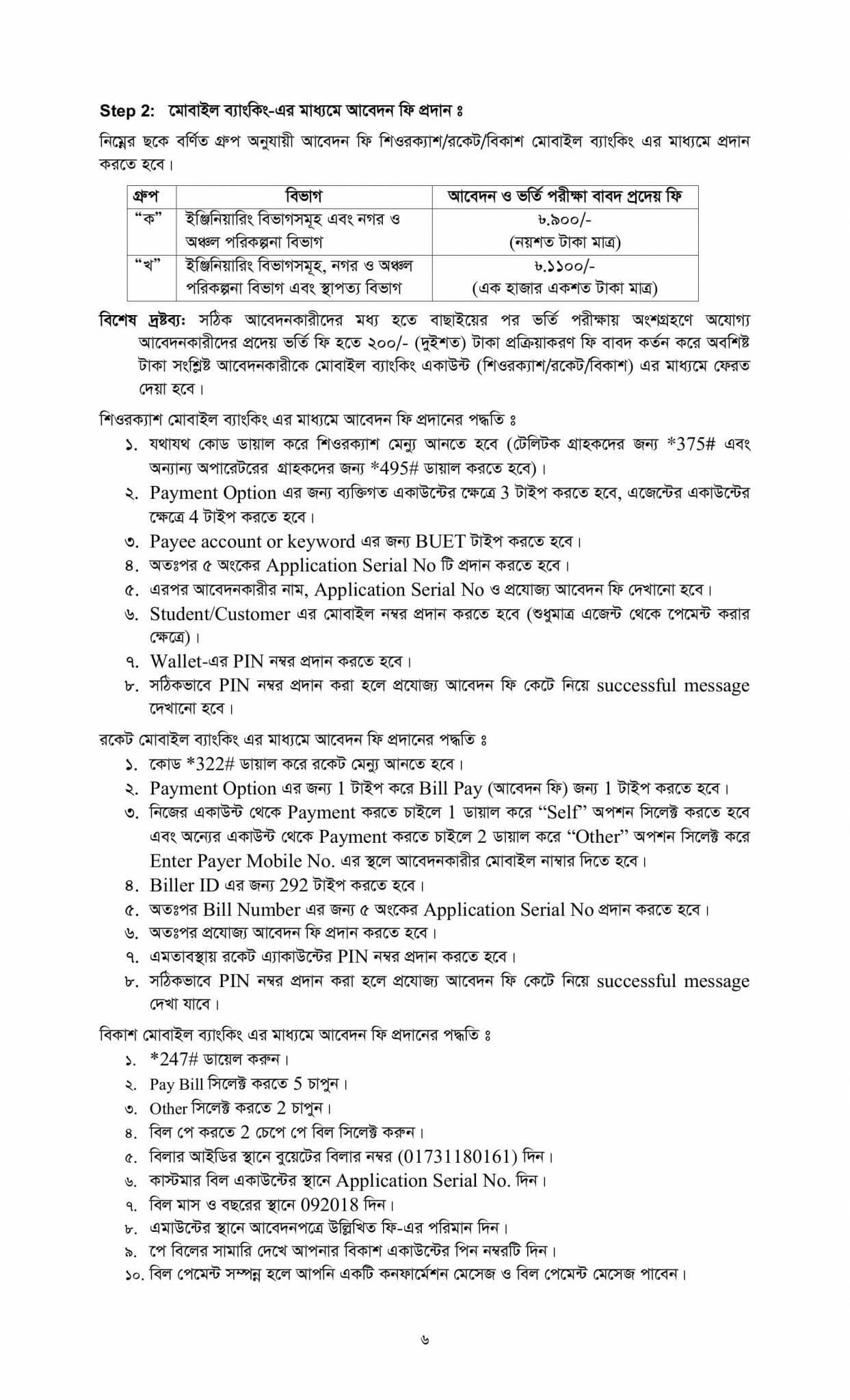 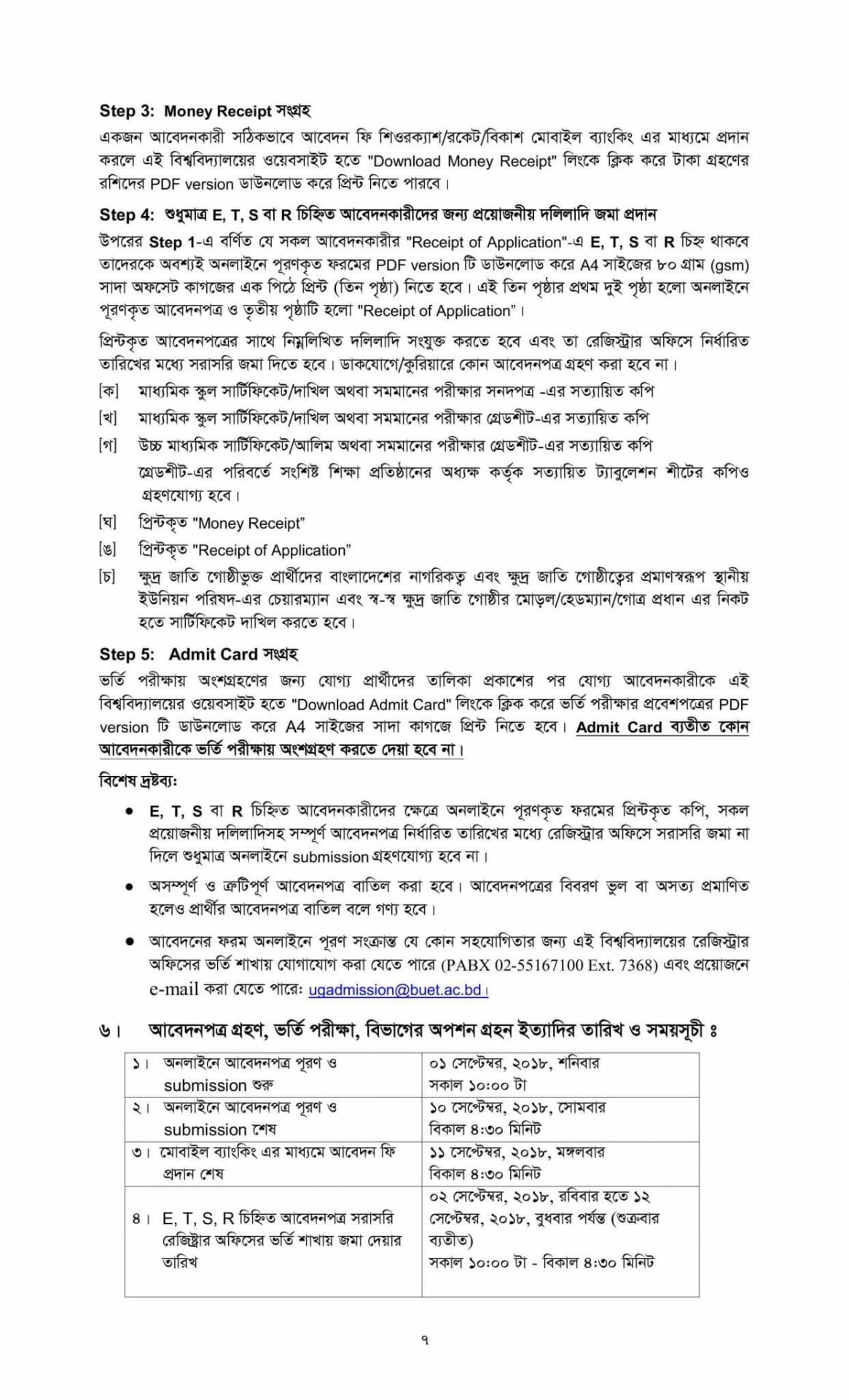 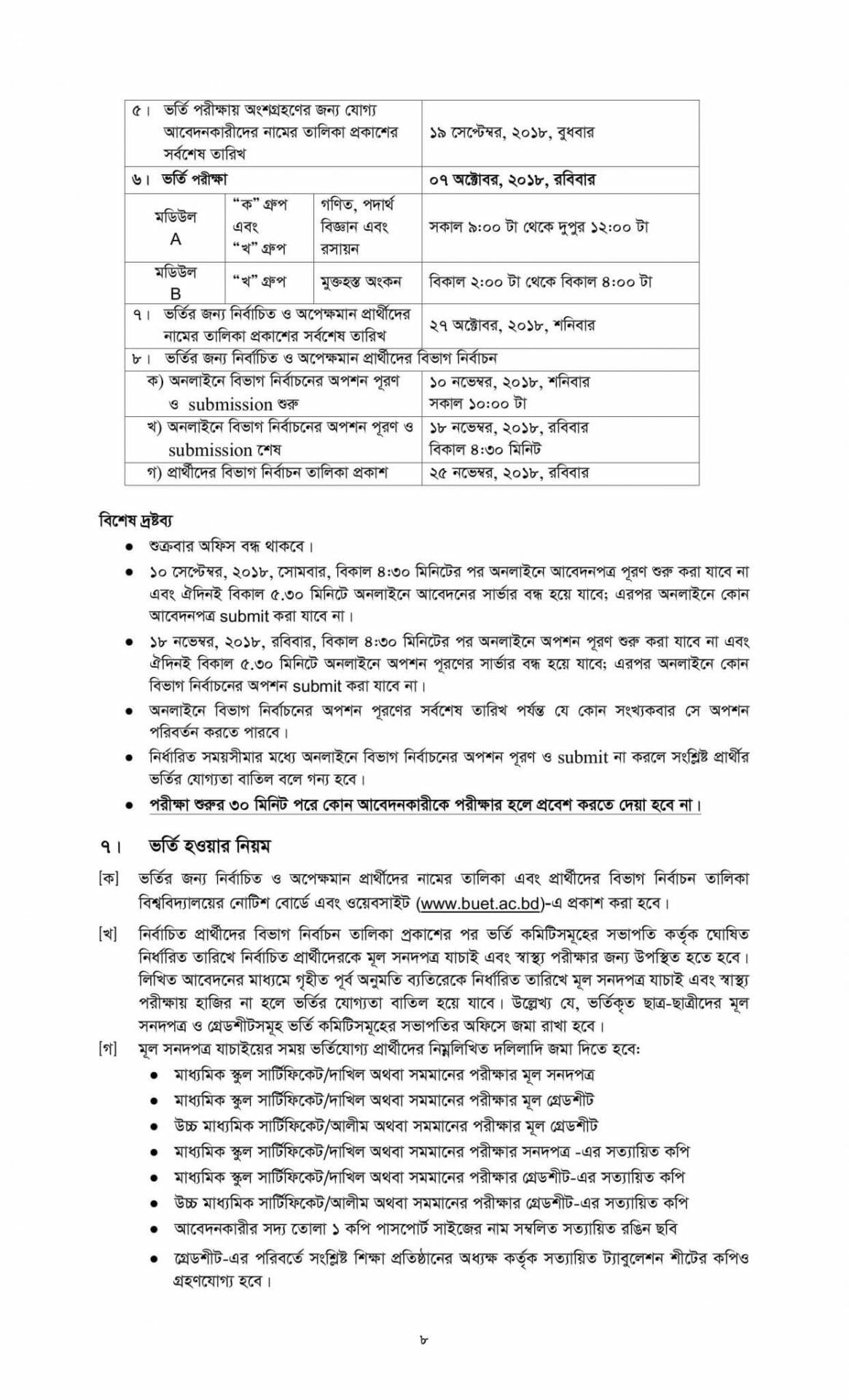 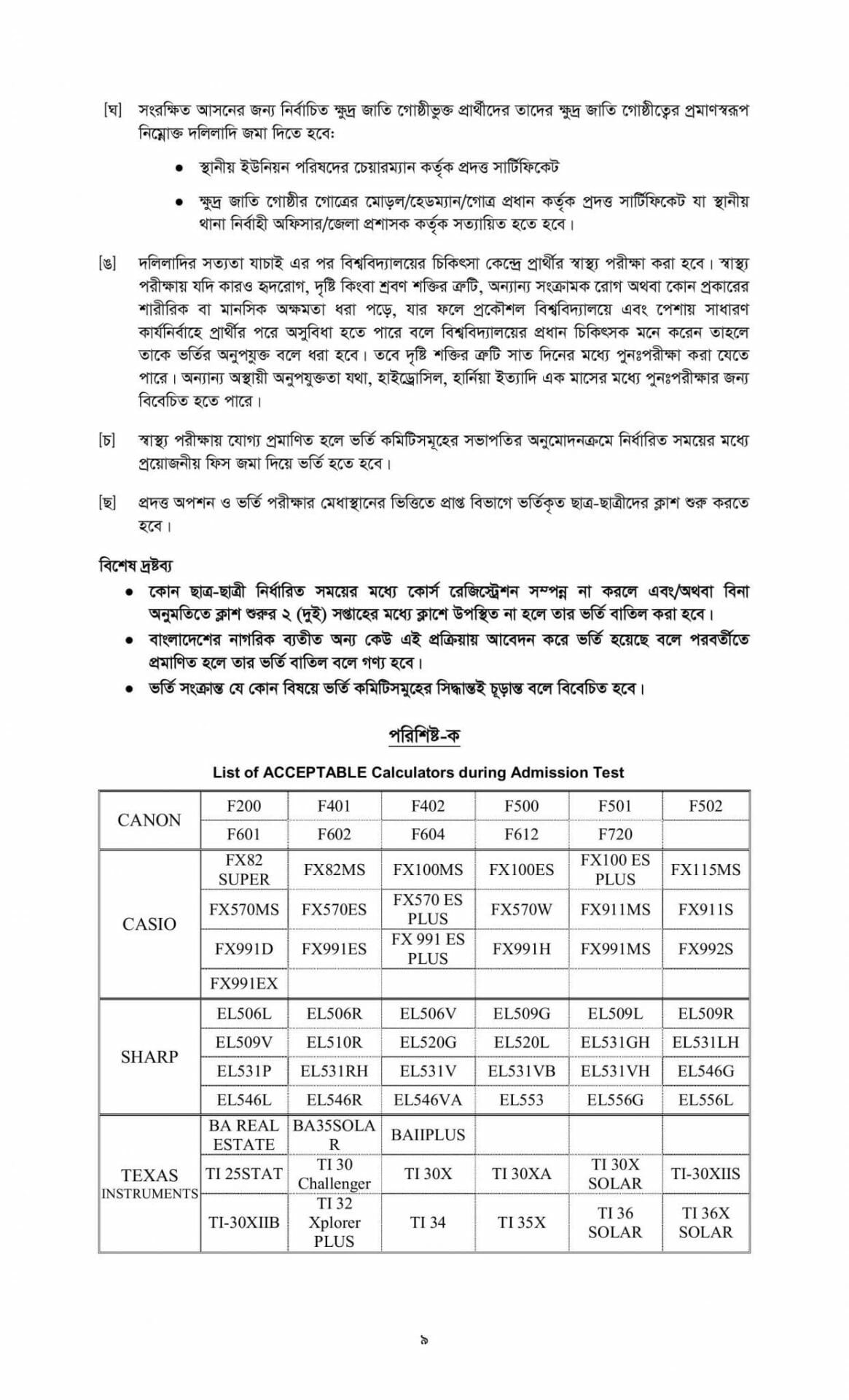 Dacca Survey School was established in 1876 as a survey school at Nalgola, west of the current Sir Salimullah Medical College campus, in Old Dhaka by the then Government of Bengal under British Raj. It offered a survey course of two years to train land surveyors, at the end of which students competed at the Sub-Overseer’s examination. According to a report on public instruction in Bengal, on 31 March 1903, Dacca Survey School had 117 students of which 103 were Hindus and 14 were Muslims. In 1908, the school started to offer diploma degrees. Khwaja Ahsanullah, a philanthropist, and member of the Dhaka Nawab Family endowed donations for developing the survey school. After his death in 1901, his son, the then Nawab of Dhaka, Khwaja Salimullah released 112,000 rupees grant in 1902 in accordance. As an acknowledgment of this contribution, the school was renamed to Ahsanullah School of Engineering.
The school offered three-year long diploma courses in civil engineering, electrical engineering, and mechanical engineering. In 1912, the university was moved to its present premises. A. K. Fazlul Huq, the then Prime Minister of Bengal, appointed Hakim Ali as the principal of the school in 1938. After the partition of India in 1947, the school was upgraded to Ahsanullah Engineering College, as a Faculty of Engineering under the University of Dhaka, offering four-year bachelor’s course in Civil, Electrical, Mechanical, Chemical, and Metallurgical Engineering.[3] In 1948, the Government of East Pakistan granted recognition to the engineering college. Ali became the first principal of the college. In 1951, TH Mathewman was appointed the next principal. M. A. Rashid succeeded him in 1954 as the first Bengali principal of the college and held the post until 1960. In 1956, a new course curriculum and the semester system were introduced at the college.

On 1 June 1962, in order to create facilities for postgraduate studies and research, the college was upgraded to East Pakistan University of Engineering and Technology (EPUET), becoming the fourth University of the then East Pakistan.[8] Rashid was appointed the first vice-chancellor of the university. A partnership with the Agricultural and Mechanical College of Texas (renamed Texas A&M University) was forged, and professors from A&M came to teach and formulate the curriculum. During this period, EPUET offered courses in mechanical, electrical, civil, metallurgical, and chemical engineering, and architecture.

After the liberation war of 1971, and Bangladesh’s independence, EPUET was renamed to Bangladesh University of Engineering and Technology (BUET).

Several other departments offer graduate and undergraduate courses in different subjects: Engineering, Urban and regional planning, Naval architecture and marine engineering, Industrial and production engineering, Petroleum and mineral resources engineering, Computer science and engineering, Glass and ceramic engineering, and Biomedical Engineering. These courses were all added to the university at different times.

In 2007, BUET celebrated 60 years (1947–2007) of engineering education in Bangladesh by arranging a 6 month long series of programs and events